Have you ever been on vacation in Australia and wanted to go to the beach but couldn’t find flip-flops to buy for yourself and your travel companion? Perhaps you couldn’t buy one because you continued to ask for flip-flops, which go by a different name in Australia.

So, what do Australians call flip-flops? To learn more, read this article. It will also give you more information about why they aren’t called flip-flops.

Flip-flops are a style of lightweight sandals frequently used as a simple form of footwear.

They either consist of a solid foundation with a strap across all the toes or a flat sole held freely on the foot by a Y-shaped strap known as a toe thong that crosses between the first and second toes and around both sides of the foot.

People from many different cultures around the world have used this type of footwear, which dates to the ancient Egyptians.

In Mesopotamian, the strap comes in between the third and fourth toes. There was also the Paduka, popular in India as a type of flip-flop with no straps and a little knob between the first and second toes.

It wasn’t until after World War II when soldiers brought these sandals from Japan, did flip-flops become popular in the United States. In the 1960s – due to their widespread acceptance – these sandals gained notoriety as gender-neutral summer footwear.

SEE: How to Stop Shoes From Rubbing the Back of Your Feet

When can you wear flip-flops?

Flip-flops are appropriate for wearing at the beach, near swimming pools, in public restrooms, in gym locker rooms, and around the house.

In addition, they should only be worn for a brief period and only if they feature supporting straps, a cushioned sole, and at least some arch support.

What do Australians call flip-flops?

In Australia, flip-flops are referred to as thongs.

They are one of the oldest shoe designs in the world. For years, Australians have adored this functional yet liberating shoe.

Why do Australians call flip-flops thongs?

Thong is an Australian word that means restraint. It is a piece of rubber, leather, or hide used to secure the feet inside of shoes.

Flip-flops have a Y-shaped material that runs through the middle of the big and second toes to hold the feet in place. The shape bears many similarities to the thong, which is why flip-flops are called thongs.

What did flip-flops use to be called?

Before they were changed to flip-flops, this footwear was known as shower shoes.

The name came from the fact that military recruits were aware that they did not want to go barefoot into a public restroom or shower.

Is flip-flops the same thing as sandals?

Conversely, flip-flops are a kind of sandal. They have a singular Y-shaped strap that connects to the sole of the shoe between the big toe and the second toe. This strap typically clasps on either side of the arch of the foot.

Given the straightforward construction and low-cost materials used to make flip-flops, you can occasionally get a good-quality pair at well-known fashion stores.

On the other hand, sandal designs are frequently pricier. Many sandal designs start at around $20 because of the more robust construction, premium materials, and intricate design.

What temperature should you wear flip-flops?

Flip-flops can be worn outside when it’s warm and not uncomfortable.

Can you wear flip-flops in March?

No, you can’t. From October to March, it is not the best time to wear flip-flops as it’s winter, and wearing flip-flops can expose your feet to cold.

Is it okay to wear flip-flops with jeans?

Yes, it is okay. You can wear flip-flops and jeans as they go nicely together.

Can you wear flip-flops every day?

No, you can’t. Wearing flip-flops while walking for extended periods can seriously harm your feet, hips, knees, and back.

It is believed that wearing flip-flops all the time leads to overstressed tendons and an overworked arch.

SEE: What Kind Of Material Are Crocs Made Of?

Are Crocs better than flip-flops?

Certain flip-flops have soles that are more durable and accommodate the foot arch. But in the end, Crocs prevail as the superior shoe because of their improved comfortable features and longevity.

Flip-flops are technically a type of sandal that has a Y strap and an open back. These shoes are so common that every country and demographic origin has given them a unique name, and Australia is no exception.

While you might think of thongs as underwear in Australia, they are also known as flip-flops. These shoes are only worn in seasons outside of winter because they are the ideal summer footwear. 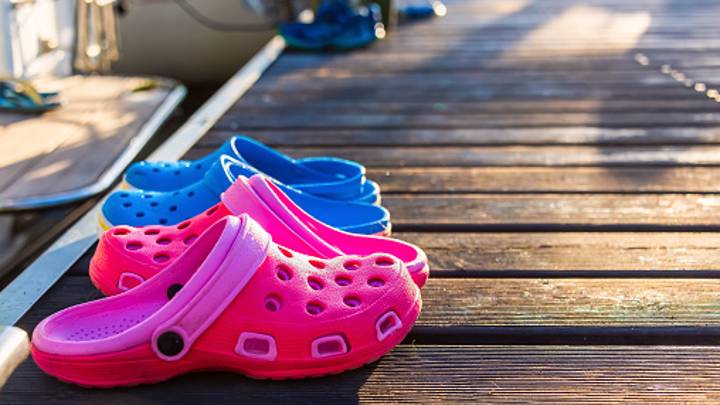